This week Beatles drummer Ringo Starr was inducted into the Rock and Roll Hall of Fame for his solo career. He is one of the few two time inductees with his previous induction as a member of the Beatles. Ringo added a solid and creative beat to the brilliant Lennon/McCartney while in the Beatles. He also contributed to all other Beatles members solo careers as well.

Ringo has an unmistakable groove that is copied by bands like Coldplay, Tame Impala and Electric Light Orchestra. Apart of his unique playing is that he plays fills from the floor tom to the rack toms. This is due to being a left hander playing a right hand drum kit set up. While not a technically flash player, Ringo’s playing has always served the song first and foremost.

Ringo still tours with his all star band and recently released a new album called Postcards from Paradise in 2015. 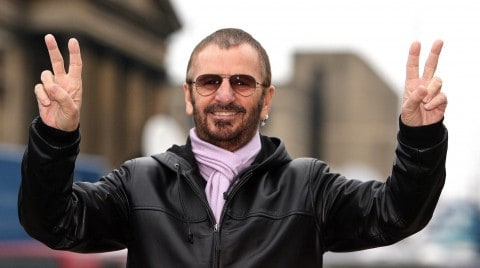 All I’ve Gotta Do – The Beatles

Listen to this excellent drum part created by Ringo from the Beatles second album With the Beatles. Previous to the band being signed to a recording contract they would play long sets of cover songs. When working in Germany the band would often do 7 sets per night. The amount and variety of material the band would have to play added to the versatility of all band members playing skills.

Ringo played rock and roll with ferocious drive. The Beatles covered many of the rock and roll stars such as Chuck Berry and Little Richard prior to gaining a recording contract with EMI. The would record many of these covers early in their career. Check out the last chorus of this for some wild fills making the song peak.

Ticket to Ride – The Beatles

Like All I’ve Gotta Do, Ringo creates a great signature drum hook to add to the interest of the song. I have heard many drummers try to play this groove and be surprised at its complexity for something that sounds simple. This song was featured in the band’s second movie Help.

Ringo points this out as his proudest studio moment with The Beatles. With The Beatles stepping out of the touring and concert stage during 1966, more time was spent on making their studio recordings of the highest standard and more innovative. Ringo’s drum sound on this track is just slamming. As good as any Keith Moon playing from the era.

A Day in the Life – The Beatles

Listen to Ringo’s fills between the vocals. This song was a crowning achievement in the Beatles studio catalog. From the album Sgt. Peppers Lonely Hearts Club Band. Ringo was also playing piano on the last chord of the song where on four keyboards the E major chord was slammed and let resonate.

Ringo wrote this song from The last recorded Beatles album Abbey Road. Inspired by a trip out on the water it was Starr’s second song he ever wrote and his best vocal during his time in the Beatles. It has become a much loved children’s song covered by The Muppets many times.

The first solo album post Beatles by John Lennon was a stripped back and raw recording with Lennon, Ringo on drums and friend from the Hamburg days Klaus Voorman on bass. Starr played with simplicity and purpose to support the emotional lyric content of Lennon’s confessional songs. A lesson in taste.

This was Ringo’s first number 1 single and the start of a string of top ten hits from 1972-1975.  He had the most chart success of any solo Beatle during this era. This song was written by Ringo and George Harrison and featured on his hugly successful album, Ringo. This performance comes from the George Harrison memorial concert and features an all star band.

Take It Away – Paul McCartney

Ringo was still the first choice drummer on many of the solo Beatles projects following their break up in 1970. With the best drummers in the world vying for the drum gig behind a former Beatle, Ringo was called upon by George Harrison, John Lennon and Paul McCartney to provide his signature drum sound to their recordings. Here he is playing on the Paul McCartney hit Take it Away from 1982.

When We Was Fab – George Harrison

George had a big commercial comeback in 1987 with the hit song “I Got My Mind Set on You” and the album “Cloud 9”. Ringo provided drums on much of the album and appears in the clip for the song “When We Was Fab” as well as cameos by many other famous musicians. He recreates his Beatles era style and sound on the drum parts of this song.

Ringo was the narrator of the early Thomas the Tank Engine episodes from 198 to 1987.