One of These Nights – VCE Music Performance Solo Guitar

One of These Nights proved the Eagles could rock. When guitarist Don Felder joined the Eagles they gained a rock edge to their sound. He joined for the bands fourth album titled after this track. Other band guitarist Bernie Leadon was proficient in bluegrass and country skills. As the Eagles began pursuing a rock sound, Leadon would soon leave to be replaced by another legendary rock guitarist Joe Walsh.

One of These Nights is in the Rhythm Works category of the VCE Music Solo Performance guitar exam. You are required to play at least one song from this category in your exam. The focus in performing this song is the funky rhythm guitar parts and the guitar solo.

One of These Nights – Equipment

Any guitar that has hum bucking pickups will be appropriate. Eagles guitarist Don Felder used a Gibson Les Paul when recording One of These Nights. This is the guitar heard delivering the liquid toned guitar solo. The neck pickup will allow you to get the smooth cleaner tone for the Verse and Chorus. 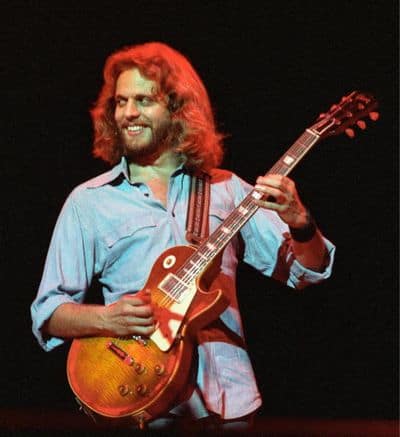 One of These Nights – Structure

Intro – two parts to focus on learning. The sliding funky rhythm part is played with a guitar set to the bridge position. Following this try and play the harmony lead guitar part on one guitar. Dial in the distortion and let those notes sustain.

Verse – learn the rhythm guitar part in the right speaker. The muting is very important to get the funky sound. Silence creates the groove.

Solo – an iconic rock solo from Don Felder. This song uses E minor scale all over the neck so learn your scale patterns. Concentrate on learning each phrase individually. Be able to sing the phrase back to yourself.

Chorus til end – listen to some of the fills that are being played under the ad lib vocals as the song ends.

One of These Nights – Techniques

You will need to have good command of these techniques to successfully play the song: