How to Play Open Chords on Guitar

Open chords are the richest sounding chords to play on guitar. When people imagine a guitarist playing they usually conjure the image of open chords being strummed. They can frustrate beginners due to the physical demands required to play them. In this article we will help eliminate some of that frustration with tips to learn and improve playing open chords.

Open chords get their name as they include an open string within the shape of the chord. Open strings are when no fingers are pressed to the string while it is struck.

I like to break down learning open chords to 10 shapes. I do not include chords that are sevenths, like G7 at this stage. The open chord shapes in this lesson are labelled on chord charts like this:

The lower case “m” next to a chord means the chord is Minor. Am = A minor chord.

A capital letter by itself as the chord title means the chord is major. A = A major chord.

I like to break the 10 chords up into three groups. The G family, The Am family and the Odd Bods.

This open chord uses all four fingers on left hand. Start with pinkie on string 1 at the third fret. Stack your third finger on top of pinkie on the next string, third fret. Follow that by taking middle finger (2nd finger) to the very top (6th string) also at third fret. So that is three fingers on third fret, good way to remember where they need to sit. Last of all, 1st finger ends up supporting everything on string 5 at second fret. Strum all six strings when playing the G open chord. 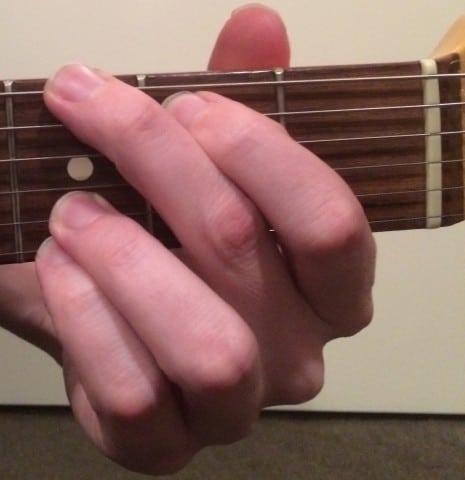 Like the G chord. All you have to move is your top two fingers by dropping them down a string each. When strumming this chord start the strum from the 5th string. Try joining G and Cadd9 chords together by strumming each chord four times. Do this slow enough so there is no pause in your playing. 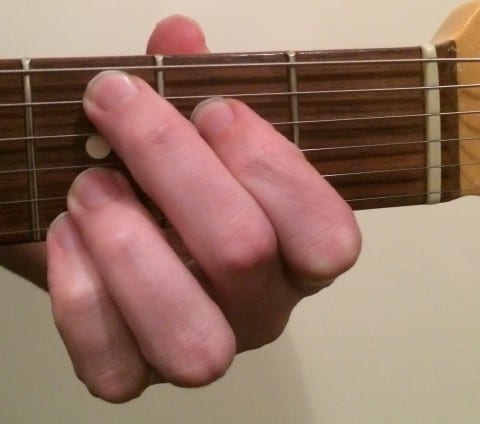 This open chord resembles a triangle. Start with 1st finger going to second fret on string 3. Next finger also will go to second fret, this time on 1st string. Last the 3rd finger will balance the chord moving to third fret of string 2. Only strum from 4th string. 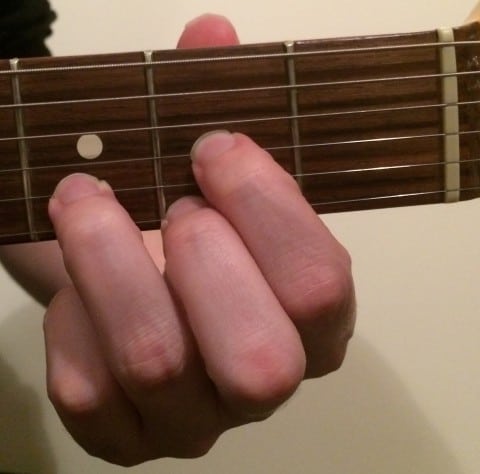 This is physically the easiest open chord to create. Take two fingers to second fret, string 5 and 4. Here I have used 1st and 2nd finger. Using these fingers makes it easy to change to a G and D chord. Strum all six strings when playing this chord. 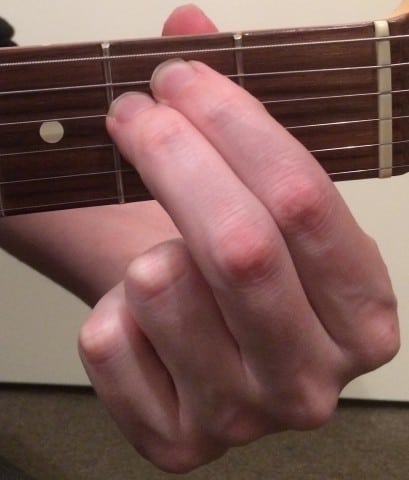 The next group I teach are physically harder than my G family grouping of chords. They may take a bit longer to feel comfortable. They will also require you to really get on the points of your fingers to make sound clean. Here is how to play them.

This chord is the easiest out of this grouping. Start by placing 1st finger on 1st fret of second string. Next take big middle finger (2nd finger) to 2nd fret of fourth string. Follow that by placing 3rd finger in the gap you have created, placing it at 2nd fret of third string. Strum from the fifth string when playing this chord. 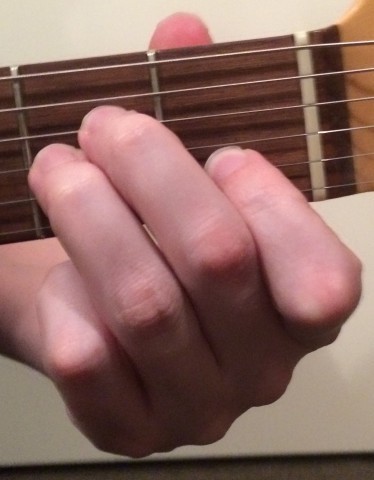 Learned A minor yet? If you have there is a quick easy way to move to the C major chord. Hold the A minor chord. Now ONLY move 3rd finger (finger next to your pinky) to 3rd fret of fifth string. It is quite a stretch this chord. Learning the A minor first, then shifting to the C chord should make this task a bit easier. Strum from the fifth string when playing this chord. 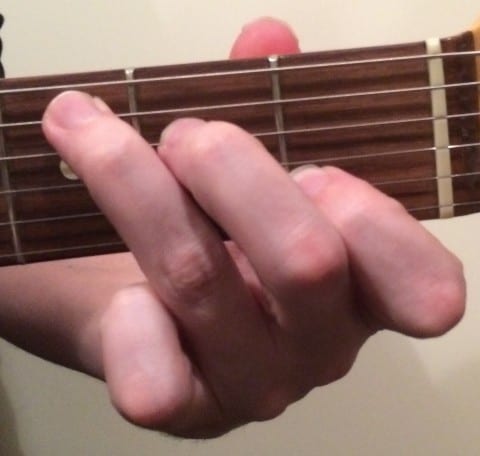 The chord all beginner guitarists HATE!!! I call this chord the staircase shape. Start by placing 1st finger at 1st fret of second string. 2nd finger then to 2nd fret of third string. 3rd finger to 3rd fret of fourth string. This will form the basis of the F chord shape. Your last step will be to flatten the 1st finger to cover string 1 as well at 1st fret. This is the hardest chord in the collection to get sounding clean. Work on getting strings 2,3 and 4 sounding clean before worrying about flattening out to cover strings 1 and 2.

Another way to learn this chord is work from the C chord. Make the C chord shape. Then take your 2nd and 3rd finger down a string. You will create the same staircase shape as mentioned above. Flatten 1st finger down to cover strings 1 and 2 at 1st fret and there is an F chord. Strip from fourth string when playing this chord. 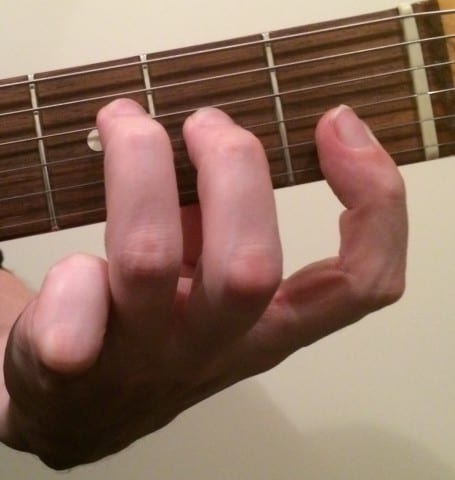 Have you learned the A minor chord yet? If you have move all your fingers up one string for the E major chord. Strum all six strings when playing this chord. 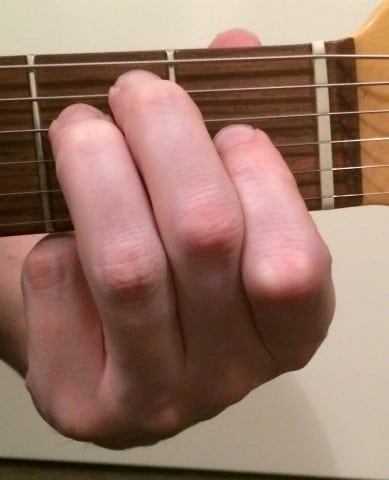 There are two shapes that I leave stand alone to learn in our set of ten major and minor open chords. They do not easily move to groups of chords the way those contained in the G family or A minor family have. Here is how to learn the A chord and the D minor chord.

A is the first letter in the alphabet. The A open chord on a guitar actually looks like a number 1. Two ways you can form this shape. At 2nd fret of the guitar place fingers 1, 2 and 3 on 2nd fret. Place them on strings four, three and two. An alternate is just to use your 1st finger and lay it flat on strings 2,3 and 4. Leave string 1 sounding dead. Both are perfectly acceptable ways to create the A open chord. Strum from fifth string when playing this chord. 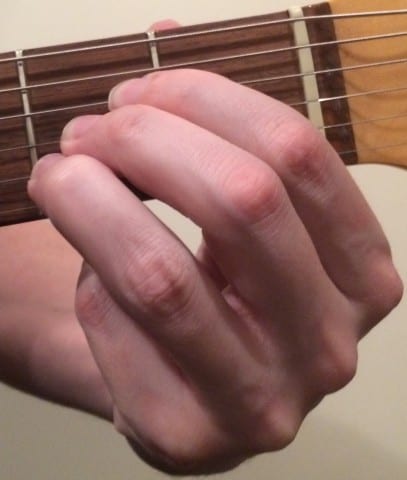 This is formed by placing 1st finger at fret 1 of first string. 2nd finger jumps a string and lands at 2nd fret of string three. Finish of the chord by placing 3rd finger at fret 3 on the second string. Strum from fourth string when playing this chord. 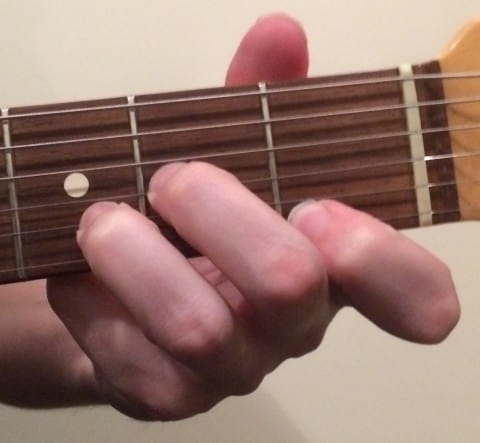 There you have your set of open chords. Get practising and let us know how you go on either our Facebook or Twitter pages.

Got questions? Contact us via the form on this site or call Rhys on 0421 705 150 to discuss taking guitar lessons at the Eastern Suburbs School of Music.