Pantera were the most popular metal band of the 90s. The instrumental skill of the band was driven by brothers Vinnie Paul on drums and Dimebag Darrell on guitar. This song signalled a change in their sound from glam power metal to modern thrash and groove.

Cowboys from Hell features in the single note category of the VCE Music Solo Performance Exam. From this group of songs you must perform at least one piece. 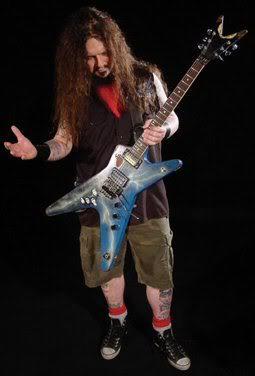 Your guitar should have humbucker pickups as you need to play with high levels of distortion. Dimebag famously used Dean Guitars. Your amp sound will need to be scooped. This involves taking the mid range out. Check out sound examples of the MXR Dime Distortion pedal to help capture the tone.

An additional touch can be using a flanger in the intro of the song. This part may be on the backing track you are using or can be played live before the first riff kicks in.

Intro – three riffs to learn. The song opens with the chorus riff played an octave higher. This drops when the band kicks in. Following this is the verse riff, introduced before the singing starts.

Verse – listen for the clever way the riff is split from how it was used in the intro to the verse. Further to this understand how variations are made by repeating parts.

Prechorus – short section of power chords followed by the a short E blues riff leading into the chorus.

Chorus – uses the riff learned in the intro.

Post solo – the band plays a series of riffs.

Chorus – repeat of the first chorus.

Outro – this uses the post solo riff. The song ends with a series of accents.

In order to perform a high quality version of Cowboys from Hell you will need to pratice: