Jeff Beck was a guitar trailblazer through the 70s jazz fusion era. His two albums Blow by Blow and Wired featured great compositions and stunning solos. These albums set the standard for guitar instrumental music. The song Led Boots is the lead off track from Wired.

This song is in the single note category of the VCE Music Solo Performance guitar exam. You must perform at least one song from this category in your exam. The list of songs you must select from can be found following this link. 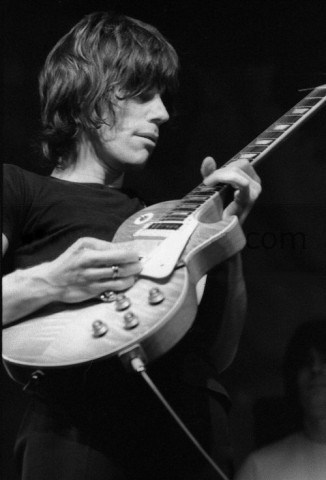 The guitar tone on the recording reflects a Fender Stratocaster sound. You also must have a guitar with a tremolo unit for the bar vibrato and bombs. Jeff Beck has his own signature Fender Stratocaster. Look at the features on this guitar for an idea of what you will require.

The distortion sound is that of a driven Marshall amplifier. Thick tube distortion sounds verging on breaking up out of  control. The Led Boots pedal made by Rockett is modelled on the Beck sound of this era. Listen to the sound clips to get a better understanding of the sound you are trying to recreate. Use a delay pedal to enhance the single note sound. Use subtle settings to create depth.

Intro – short burst of chords. Make sure you nail the syncopated accents for maximum effect.

Head – You can break down the head into labels used in pop songs. You will hear an intro, verse and chorus section. The intro part riffs on G Mixolydian notes. The verse consists of a melody played four times and varies the octave it is performed in. The chorus contains a fast riff in C.

Solo – the most difficult part of playing this solo is the phrasing. Listen closely to the timing of each phrase. It will help to use software such as Audacity or the Amazing Slow Downer.

Head – look for the variations from the first head section. The song fades on the “chorus” riffs. On the Wired album version a keyboard solo is performed at this time. As all guitar parts are completed by this time the track will fade out to finish your performance.

Use this list to create exercises for your technical work SAC to be completed in school. Things to learn to play Led Boots are: