Scales in music are a selection of notes from the twelve sounds in our music system. If you are unfamiliar with the twelve notes in music read our earlier article on Understanding Music Notes.

We will be discussing the following scales and modes pictured below. These are the most commonly used in contemporary music. It is a great starting point to learn and understand these scales. You can save the picture below for quick reference. We discuss here in detail in the article below. 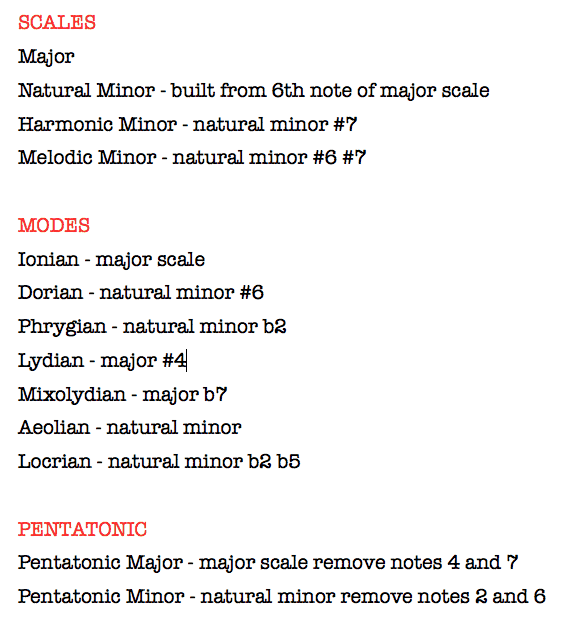 There is one major scale. This can start on any of the twelve notes in the music system. Scales have their own unique sound. This is due to scales all having their own formula of tones and semitones. A tone is a movement of two notes, a semitone moving by one.

As an example if we started this formula from the note A we would have the following notes in the scale:

You can start this scale on any of the twelve notes mentioned in our understanding music notes article. Even though the major scale will start on a different pitch, the sound produced will maintain a happy character. To help with your understanding make sure you play these notes on an instrument.

There are three different minor scales used in our music system. These are known as Natural Minor, Harmonic Minor and Melodic Minor.

Modes are created by taking the major, harmonic minor or melodic minor scales and using each note in the scales as a new starting point. The emphasis on a new starting note creates a unique sound for each mode. In this lesson we will explore how the modes of the major scale can be learned.

The modes are named after regions of Ancient Greece.

Dorian – this is created from the second note of the major scale. It is a minor sound with a twist on the sixth note being raised.

Lydian – this mode is just like major scale. We change the 4th note of major my raising it. It produces an exotic sounding mode often used by guitarist Steve Vai.

Mixolydian – rock music commonly leans on this mode. It is making use of major but lowering the 7th note. AC/DC are often using this mode for its blues take on the major scale.

Locrian – natural minor but lowering the 2nd and 5th notes.

An example of the notes of modes from the A major scale can be seen in the table below.