Rehearsal is a word that can create anguish into the heart of any musician and band. Often the experience is tedious in comparison to the gig. Try these ten tips to make your rehearsal effective and musically productive and more enjoyable! 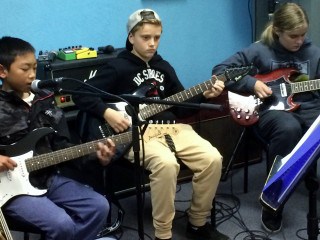 Do you need to take five hour session for what can be achieved in two. I find the best rehearsals last no more than two hours, including a 20 minute break.  Focus on quality not quantity.

Create a list of items that need to be addressed during the rehearsal. This will help you stay focused on the tasks at hand. Often rehearsals can turn into catch up sessions. This can be done after the playing has taken place. Is trying ten new songs a realistic goal when you can perfect five? This will also avoid meaningless jamming and noodling, while fun is very unproductive. Make a list in the notes section of your mobile phone.

Learn songs before the rehearsal not AT the rehearsal. This shows respect for the other band members as you will not be wasting their time and causes frustration.

The ability to develop nonverbal communication skills are vital to any performance. Do you have a leader in the band that everyone follows? This person does not need to be the best player the band, but will be the one that understands the structure of the music best. Does your group have one of those people? If so rely on them and make it understood they are the leader, give them the confidence to start queuing band members with head nods, shoulder gestures and hand signals. It is important that these are talked about between members and understood what the queues mean.

Quite often people that are new to playing with other musicians struggle to piece together rhythmically.  By nodding in time with the music and getting your body moving other band members will have a visual cue as to how the pulse of the song is being felt. A band that moves in time together plays in time.

Too often in rehearsals a song is played once, shakily, and then moved on from. I think it is optimal to place a song 3-4 times. Allow each member of the group to be comfortable with their part. Songs are performed best when band members are no longer thinking of what to play.

The voice memo app on the iPhone is a great tool for quiet rehearsals or purchase a recording device such as a Zoom. This is a great way to review the strength of your playing, which is difficult while you are in the moment playing and practicing.

Do you need to be playing at full volume to achieve the desired results. Talking your way through a song with instruments unplugged and a drummer tapping on a table is often a great way to learn structures of songs together. This will give you greater confidence in playing your parts when the volume is cranked to 10!!!

Stop at the point the rehearsal has maxxed out. There is a tipping point to each rehearsal where it will no longer be productive or ideas retained. Recognising when it is time to put the instruments away.

I hope these ideas will make your rehearsals more productive and enjoyable.