Knowing the major scale chords will help you learn songs faster, figure out lead parts and write music. Each scale in music produces a set of chords. As covered in our article on triad chords and sevenths chords, we leap a note in the scale to create a chord.

This article will help you understand how chords are formed using the notes in the major scale. Look at the end of the article for a cool tip about how to apply this knowledge to the minor scale as well.

If you would like further help in understanding music theory contact us via the form on the right of the page or calling 0421 705 150 to book lessons with the Eastern Suburbs School of Music.

Lets create the chords of the A major scale. These chords have been formed by leaping a note through the scale. We need to collect three notes to make the chord. When starting on the note A and leaping over a note each time we have the notes A, C# and E. When played together these notes sound an A major chord. When starting on B and leaping we get B, D and F#. This creates a B minor chord. After doing this for each note in the scale we have this set of chords:

The formula for the chords of the major scale is: 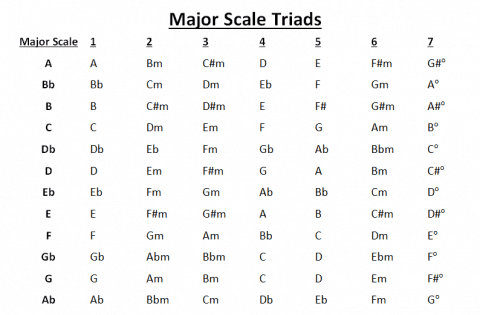 It is of great benefit knowing the major scale chords sequence. If a song is in G major you know that there is now only a small selection of chords to choose from. Most commonly the chords built on notes 1, 4, 5 and 6 are used in creating pop and rock songs.

In G major these chords are G major, C major, D major and E minor. There is a million songs using this exact set of chords. The popular song Brown Eyed Girl by Van Morrison is one example, heard below.

These chords are further explained in our article on sevenths chords. These chords will add more colour to your playing. Make sure on the 5th chord of the scale you play a dominant 7. While all minor triad chords turn into minor 7, our major triads turn into major or dominant 7. Be aware of what chord is the 5th from your chosen major scale.

Remember as discussed on our article on the minor scale that the natural minor has the same notes as the major scale. The same note contents will produce the same chords! Therefore you have also learned how to find the chords to any songs that are in natural minor keys as well.

We hope this article has been useful in learning major scale chords and how to make use of this shortcut to learning songs.