How to Play Bass

One of the easier string instruments to start learning is the electric bass guitar. The most common way to play this instrument is plucking one note at a time. No need to learn difficult chord shapes like guitar. You can get straight into playing with other musicians in short time. In this article we explain all you need to know about what bass players do on the instrument.

The bass guitar is tuned the same as the lowest four strings on a guitar. It is the same tuning as the double bass. The difference in pitch to a guitar is that it is an octave lower. On a bass we play mostly single notes at a time. The bass parts are called a bass line. 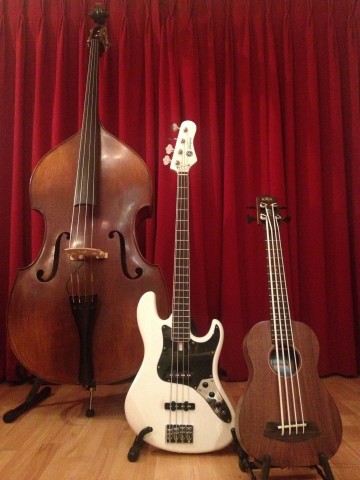 In lessons these are the types of lines you will learn to play bass. You hear them in several different styles of music. Our teachers will give you a great understanding of these skills.

This type of bass line is commonly heard in AC/DC songs. In this song Riff Raff the bass player holds down the root note while the guitars play a riff.

This will have you playing the same note name but different pitch. For example playing a G note and then playing the next highest G note. This kind of bass line was commonly played in the disco era of the 1970s.

This disco era classic uses this style of bass playing.

In both scales the root note is G and the 5th note is D. This bass line is therefore quite simple to apply. You can confidently play this over major and minor chords.

This sound is commonly heard in classic country and western songs.  Listen to this Johnny Cash song. You will hear this bass line used throughout.

This adds a note that is the next highest root note. While this is not adding any note names to our bass line, it does give us a variation with a high and low pitch of the same note. Playing a root-fifth-octave in G major or minor would have you playing the notes G – D then the next highest G.

An example of a song that uses this type of bass line is Hotel California by The Eagles.

We now will be adding notes from the scale to move between one chord to another. The notes we add come the scale the song is written in. A song that is written in G major can use all the notes mentioned earlier as appropriate passing notes. We most commonly chose the neighbouring notes in the scale and play them on the last beat of the bar. This creates tension that is resolved by landing on the root note of the next chord. It is played late in the bar to avoid creating an emphasis on the passing note.

This type of playing is heard in the Supremes song Baby Love. Listen out for the passing notes.

To create further melody in your bass lines we include more notes from the scale. It is now we need to be aware of what type of chord we are creating a bass line for. We concentrate on using the notes that are within the chord being played at the time as well as passing notes from the scale. Players can be very creative when playing walking bass.

This type of bass lines are prominently heard in blues and jazz. Listen to this Van Morrison song Moondance to gain an understanding of the sound of a walking bass line.

Got more questions? Get in touch with us via this contact form for all things bass related.

Need a bass? Instruments can be purchased from KC’s Rock Shop for students attending the Boronia location, or Guitars and Things in Frankston for those attending the Carrum Downs premises.

We thank these businesses for being loyal supporters of the Eastern Suburbs School of Music.