BB King – King of the Blues

This week we lost one of the remaining pioneers of the Blues, Mr Riley B King better known as BB King. He invented the approach that modern blues players use on the electric guitar. He would do more with one single note than any other musician His earliest guitar influences were local preacher Reverend Archie Fair and cousin Bukka White. After leaving the cotton plantation work in the Deep South of America, Riley King made his break as a radio station DJ. He wrote and recorded a jingle promoting a sponsors product and thus began his recording career. His breakthrough single was made in 1951 named “Three O’clock Blues”. BB would then be on the road touring until his recent passing, playing hundreds of shows each year. BB would reach a wider audience in the 1960s by crossing over to a white audience. This was due to the British Blues explosion from acts like The Rolling Stones, The Yardbirds and Cream. I was lucky enough to see BB King live twice, once here in Melbourne and once at his own club in New York. The Melbourne show still remains the most memorable live music performance I have ever experienced. 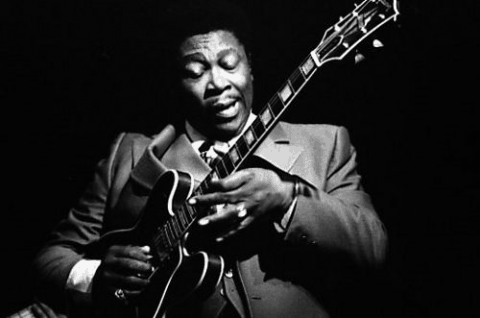 Famously BB plays a custom Gibson 335 guitar known as Lucille. The name came from an experience BB had a at a gig in the 40s. A fight in the bar caused a fire. Once BB realised he left his guitar behind and raced into the burning building to rescue the guitar.Unlike the production 335, this guitar has no F holes. This is to eliminate the problem of feedback when the guitar is amplified. As well as the standard volume, tone and pickup selection switch, the Lucille model has a six position varitone switch. This allows the guitarist to have greater sound options that they standard 3 choices on a 335 model guitar. More on this model can be found here.

BB King played with a lyrical vocal lead guitar style, rarely playing chords. He would never sing and play at the same time. He describes his playing as a conversation taking place between him and his guitar. The story is more important in his playing than technical flash. His focus on dynamic control was unmatched. He could bring the band down to a whisper to hold the audience in trance and explode with ferocity to counter this. BB would also incorporate jazz licks into his playing. As well as traditional blues influences he would weave in jazz sounds from Charlie Christian and Django Reinhardt.

BB King is famous for playing lead guitar making heavy use of the vibrato technique. He developed this technique by trying to simulate the sound of lap steel players and country blues slide guitarists. BB explains in this video how he creates his unique stinging vibrato sound. https://www.youtube.com/watch?v=vg7ugDja1fA

To hear BB King at his best is recordings capturing live concerts. His most famous live album is “Live at the Regal” released in 1965. This album is a clinic of electric blues playing. The band perfectly supports BB King’s singing lead guitar playing. The audience thrills at every vocal and guitar solo. Songs that BB would record through his career all became blues standard. “The Thill is Gone”, “Paying the Cost to Be the Boss”, “How Blue Can You Get?” and having a hit single in the 1980s with U2 called “When Love Comes to Town”.

Original Fleetwood Mac guitarist Peter Green takes much of his style from BB King’s playing. Listen to this early Mac classic “Need Your Love So Bad”. Green unmistakably uses the King style of playing as well as adding his own voice. https://www.youtube.com/watch?v=RtmW2ek7WkQ

Go and listen to some BB King and celebrate the wonderful contribution he made to not only the blues but modern music.