Another Brick in the Wall – VCE Music Solo Performance Guitar

Another Brick in the Wall is one of the only hit singles the band Pink Floyd had in their long history. Floyd guitarist David Gilmour is noted as one of the premier rock guitarists of all time. This song contains an example of his style of using blues playing in pop music.

Another Brick in the Wall is a popular choice by students to perform in their VCE guitar exam. It is one of the most widely known songs in the list. It is also one of the easier songs to play.

For assistance with VCE Music contact Eastern Suburbs School of Music via the contact form on the right of this page or by calling Rhys on 0421 705 150.

Another Brick in the Wall – Equipment

Either a guitar with single coil or humbuckers would be appropriate. Guitarist Dave Gilmour used both a Fender Stratocaster and a Gibson Les Paul in the studio to record the track. Your effects pedal and amp settings are more important in this song.

Your tone for the verse needs to be clean. Use the bridge pickup as this will give you the clucky tone required for the funky strumming. A compressor pedal will be a nice addition to your sound for this song. It can be used on the rhythm lick found in the chorus. It will also help with sustain during the solo.

The solo tone is overdriven with a great deal of sustain. Using a compressor will help with sustain during the solo. Switch to the neck pickup to simulate the blues tone heard on the song.

For an even more detailed run down of Dave Gilmour’s guitar sound visit the site Gilmourish. It has detailed equipment descritions and suggested dial settings to help your achieve the sounds. 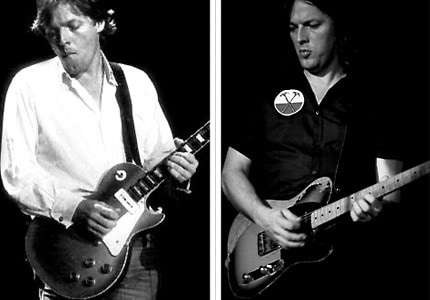 Another Brick in the Wall – Structure

Verse 1 – there are two distinct rhythm patterns to learn using the D minor chord. Listen for the difference in when the singing takes place to after the singing. Much simpler rhythm to back up the vocal. This requires skill in left hand muting.

Verse 2 – Chorus – this is a repeat so you may want to play the octave parts in  the second verse to show some variation.

Solo – this is a typical melodic solo from Dave Gilmour. There are a couple of long phrases during the solo. Control of your string bends is essential. Practice your pitching of bends with a tuner. Using the compressor pedal here will help your sound sustain during the bend passages.

Another Brick in the Wall – Techniques

To help you with learning Another Brick in the Wall learn about these scales and soloing techniques:

This clips shows Gilmour would swap to the Les Paul to play the guitar solo in a live setting.