The Red Hot Chilli Peppers found success with their fourth album containing this iconic 90s song. Under the Bridge contains guitar playing greatly influenced by the rhythm guitar style of Jimi Hendrix. RHCP guitarist at the time John Frusciante faithfully performs in this style to create a great guitar work.

Under the Bridge is in the Rhythm Works category of the VCE Music Performance Solo guitar exam. You are required to play at least one song from this section in your exam. 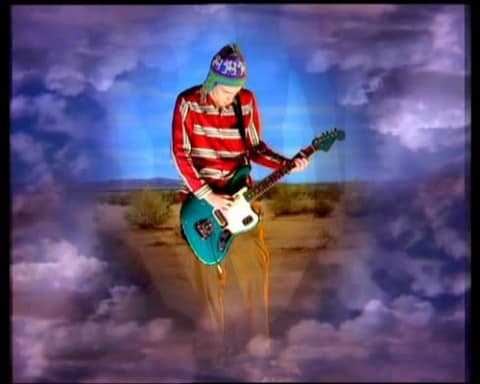 RHCP guitarist John Frusciante playing a Fender Mustang in the video for Under the Bridge.

Under the Bridge – Equipment

A Fender Stratocaster style guitar will help you achieve the tone found on the recording of Under The Bridge. Use the neck pickup. This will provide a good clean tone with just a bit of edge. A compressor pedal will help smooth out the dynamics. The outro of the song uses the chorus effect. It is set for a slightly swirling sound. Hear it from the 2:50 time mark. This can be left on for the remainder of the song.

This song is not played with a capo as it is sometimes notated. See the video at the bottom of this page where RHCP guitarist John Frusciante show you how to play Under the Bridge correctly.

Under the Bridge – Structure

Intro – the great arpeggiated chord intro going between the D and F# chord.

Verse – the chords in this section are singularly strummed. This spells out the progression that will be built upon as the song progresses.

Under the Bridge – Techniques

Under the Bridge does not contain a guitar solo. It does contain some challenging chord playing. Know these guitar techniques to have a better understanding of how to play the song. Things to learn to play Under the Bridge are:

Watch this video where RHCP guitarist John Frusciante shows you how to play the famous Hendrix influenced parts.