The world has lost one of the musically gifted composer and performers of rock music with the passing of Chris Squire. I was lucky enough to see Yes live earlier this year in what was one of Squire’s last live performances. They performed two albums Fragile and Close to the Edge in full. Both contain some of the most complex rock music in recorded history. After opening the concert with the 20 minute opus of Close to the Edge the standing ovation that followed clearly humbled Chris Squire. Yes music contained odd meters, extended chords, lightning riffs and suite compositional style. The amazing playing skill contained in the music was never at the sacrifice of being always melodic, positive and most importantly catchy.

You too can learn to play bass with the high skill level of Chris Squire. Take bass lessons with the Eastern Suburbs School of Music by contacting us on the right of this page or calling Rhys on 0421 705 150. 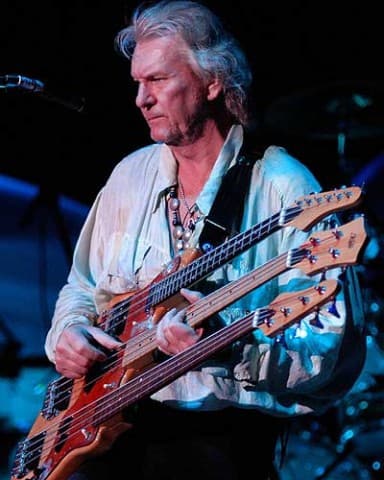 Read below to learn why Chris Squire was one of the most innovative and unique bass players in rock music.

Chris Squire furthered the rock bass tone used by John Entwistle of The Who. Like Entwistle, Squire would use distortion and plenty of treble dialled in. Squire would also use a pick like a guitarist. Squire is most famously associated with the Rickenbacker bass as played through the heyday of Yes in the 1970s. Squier would use a combination of guitar and bass amplifiers live.

Hear the tone in this isolation of his bass part in the Yes classic Roundabout.

Heart of the Sunrise

The crown jewel of the Yes catalogue. Each member contributes stellar performances. Chris Squire holds the piece together with flowing bass parts and accented sections.

This performance comes from a Yes tour that merged the classic era 70s line up with the commercially successful 80s Yes lineup.

In an era where jazz fusion bands like Mahavishnu Orchestra were filling stadiums, Yes took influence from this style on their 1975 album Relayer. The opening bass workout takes a lot of stamina to stay with. It is loaded with open string pull offs, fast alternate picking and playing off against other instruments in the ensemble. Then try singing as your playing these crazy lines!

Listen to this great live version from the Relayer tour that featured Sound Chaser as the opening song.

Going For The One

The most rocking song in Yes cannon. Chris Squire punches out accents and walking bass lines that cut over the top of Steve Howe’s steel guitar slides. All the time also singing in counterpart or harmony with Jon Anderson’s lead vocals.

This song just plain rocks out, something Yes could do just as well as anyone.

The furious riffing in this song is a challenge worth taking. Don’t forget you also have to sing over this as well.

Yes had a commercial rebirth with the hit single “Owner of a Lonely Heart” and the album 90215. The album started life as a project by Chris Squire and guitarist Trevor Rabin named Cinema. Here is the epic instrumental showing the great interplay between Squire and the 3rd guitarist in Yes history.