Stevie Ray Vaughan is the most important blues guitarist of the last 50 years. His playing style and sound is much copied. He reinvigorated the blues at a time of its lowest popularity.

Pride and Joy is in the single note category of the VCE Music Solo Performance guitar exam. Students need to perform at least one song from this group.

For assistance with VCE Music contact Eastern Suburbs School of Music via the contact form on the right of this page or by calling Rhys on 0421 705 150.

Stevie Ray Vaughan is associated with the Fender Stratocaster. This guitar has three single coil pickups. You will need to switch between the neck and bridge pickup during the song. Stevie would also tune his guitars a semitone flat. This is a common practice in rock music. It is influenced by Jimi Hendrix who played in this tuning. You can perform the song in either flat or standard tuning. Make sure your backing track is pitched correctly.

To create the distortion sound use an overdrive pedal on a low gain setting. You can also have a boost pedal to give you more volume during the guitar solo and outro. 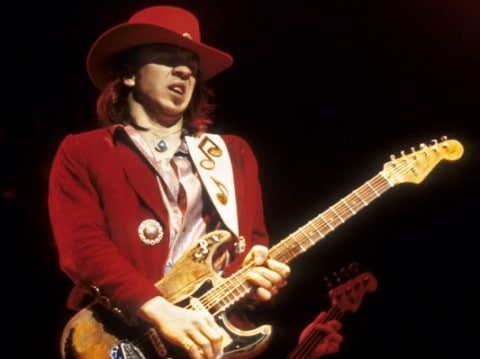 Intro – lead guitar intro followed by one playing through the 12 bar blues in E. The riff follows a walking bass styled pattern. The right hand strumming is quite demanding. Think of how a piano player hits a bass note on the beat, followed by a chord on the off beat. String muting is assisted by the left hand.

Verse – pay close attention to features in each verse. They are all slightly different.

Verse – more rhythm variations and licks start in this verse.

Stop Time – accent beat one of the first four bars of the 12 bar blues. Return to normal rhythm playing after the stop time accents.

Solo 1 – starting with double stops moving up the neck. This is followed by some fast blues scale runs in the 12th fret position.

Solo 2 – this 12 bar starts with a recap of the guitar intro lick.

Stop Time – much like the first stop time verse.

Verse – the riff is dropped for syncopated (off the beat) chord strums and licks in this last verse.

Solo – one round of the 12 bar blues to finish the song. Chord sounds again starts this solo. Jazz players use block chords to create parts of solos. This shows that influence.

Learn these techniques featured in Pride and Joy to help play the song:

Watch this performance from the 1982 Montreux festival to gain an appreciation of the techniques used.