Former Grateful Dead members formed Dead and Company in 2015. Joining guitarist singer Bob Weir, drummers Bill Kreutzmann and Mickey Hart are guitarist/vocalist John Mayer, keys player Jeff Chimenti and former Allman Brothers bassist Oteil Burbridge. This is the second year Dead and Company will host a weekend in Mexico playing three shows. I live over the other side of the world in Melbourne, Australia. Therefore, I have to make do with the webcast experience.

I have gone from casual fan to Deadhead during my recovery from cancer surgery and treatment during 2018. For that reason I am excited to find out what the weekend has in store. These are immediate reactions as I watch the webcasts with some added reflection post show. 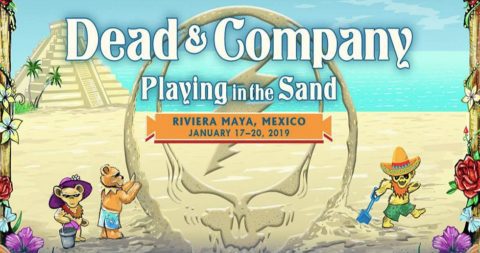 Opening with Shakedown Street. Mayer with the Electro Harmonix Qtron pedal pumping. He is now using a backline of Fender Deluxe Reverb amps. Disco ball image on the big screen giving a nod to the Shakedown Street album being called the disco era of the Grateful Dead. Jeff Chimenti’s jazzy electric piano licks allowing the space for Bob Weir’s funky rhythm playing to weave. Mayer strong first solo with great last line to signal the band to re-enter the intro. More Jerry style licks than standard John Mayer soloing. Hopefully a sign of the further development his playing can take with Dead and Company in 2019. Band comfort is showing after four years of playing together. Mayer singing great even though blew the outro chorus. Really cool vocal trail out before hitting a funky hard riff. Mayer jamming with the octave pedal on. Hot form early. Drummers trading off each other. Oteil finds a riff and rides it between octaves. Off to a flying start.

Keeping it funky on night 1 opening with a groovy take on Mr. Charlie. Nice to have a song not too heavily played by Dead and Company yet. Mayer singing the Pigpen tune found on Europe 72. Short and sweet reading with nice energy.

Mellowing out as we settle into the show with the one chord jam leading into Jack Straw. As mentioned earlier the ensemble is tight. Often performed by Dead and Company, this performance shows the comfort level they have reached. The feel is deeper than previous years. Mayer and Weir’s locked in guitar conversations right through the song. Hart adding some amazing percussion dynamic to build the layers of the song. A favourite of mine that is very well played. Cracking three song opening.

Coming down further off the funk with Friend of the Devil. Weir hands off the verse to Mayer with a nod. Excellent acoustic guitar solo by Weir. Mayer and Chimenti solos follow. This is where Jerry is missed most. The song cries for a solo informed by his bluegrass and banjo past. The slower tempos that Dead and Company play with push this point even further.

Next is Here Comes Sunshine off Wake of the Flood. starting to come off the mellow. As a result, it’s all about Mayer and Chimenti elevating this jam before Mayer signals back into the melodic intro. Oteil adding some sweet runs before bringing the verse back.

Taking us out of the mellow country sounds a deep blues groove set up leading into New Speedway Boogie. Mayer drops the pick for the solo, rounding out the guitar tone. The Chimenti tease of Bird Song in the chorus draws smiles from Mayer. Chimenti quietly heading for the MVP of the set.

Bird Song contains some sweet licks from Oteil in the set up. Nice interval leaps by Mayer in the intro solo. Kreutzmann nicely accenting Mayer sweep licks. Mid song cascades between Mayer and Chimenti leading into lick trades. The band seem to be heading out of the jam with Bob trading guitar but Mayer makes it hang in there. They are stretching further before coming into the last chorus. Outro of Speedway closes out a solid set 1 to ease us into the weekend. Few staple tunes already performed means we hopefully see some deeper cuts on nights 2 and 3.

Set 2 leading with China Cat Sunflower. Mayer nicely playing into the chord changes and key change. Weir with some nice wah riffing under his solo. Oteil bringing some gospel lines into the jam and Kreutzmann teasing the rave up with him. Mayer with some SRV style runs and the rhythm section get to use that gospel feel they teased to bring in the country feel of Cumberland Blues. Really hitting the late 60s early 70s tunes on Night 1. My girlfriend is even bopping along to this one. Chimenti continuing his hot form of set 1 and calling in Mayer to trade off fours. Mayer digging the sweep arpeggios tonight during the trading sections.

I Know You Rider coming within the China Cat bracket as we expect. Weir with some really great rhythm playing to take Mayer into his solo. Also lots of smiles from the band as they are hitting one voice with the collective jam. As a result this is the best jam of the night.

Mayer’s most Jerry like playing comes in Terrapin Station during the “Lady with a Fan” portion of the song suite. Great dynamic playing not relying on blues licks as Mayer can tend to do. My main criticism of his playing in this band is he lacks the Coltrane influence found in Garcia’s playing. I hope 2019 sees his playing go closer to the edge. Mayer has the talent and has shown glimpses in past performances of jam sections. More risks in 2019 would be a great advancement. Oteil playing some lovely melodic counterpoints to the lead lines. All players really listening as Kreutzmann nicely echoes and prompts rhythms to Mayer. Oteil getting busy. Hart has Kreutzmann back as he gets a little lost in a fill. A cool moment for the drum section.

Leading into the Drums-Space portion of the show. Oteil and Kreutzmann urging a Latin feel over the Hart soundscape he creates on The Beam. Honestly I’ll usually jump over this section when watching. Consequently, this weekend I’m keen to see the development of the piece. Dark ominous end to the trio jam. Band joining back in for Space. Mayer opens with mutron scale flourishes.

The come down from the trip begins with Stella Blue. While Bob’s voice is no longer what it was it still is a bold instrument. Because of this he sure does a passionate job on selling the story. There are the jazzy licks Mayer is capable of. that playing has me wanting to get some practice in before the day is done. Oteil shining in this one. Nice release from the darkness of Space.

Bob segues out the End of Slipknot riff. Are we going to get a Franklin’s Tower or a full Help/Slip/Franklin? YESSSSSSS! Full version. Night one made!!! I recently figured out this tune, something had been inspired to want to learn for 20 years. Look for a YouTube lesson from me soon! Mayer is lacking energy in the vocal. I think showing some fatigue at this end of the show. He still nails the arpeggio playing taking us into Slipknot. Jam seems bit forced tonight compared to some deep dark jazz space Dead and Company have performed in this song. Franklin’s also starts a bit flat with the energy lifting in the last third of the song til the end of song. Set ender.

Dead and Company – Encore, Night 1 – Playing in the Sand

Ripple as the encore, the guitarists on acoustics. Nice simulations of the mandolin lines in the song by Mayer. Good vocals to close our night one of Dead and Company’s Mexican holiday.

You really get a trip through American music history with the Dead. Blues and Country dominating tonight. Leaves the window for jazz explorations in the next two nights. A great set up for the weekend ahead.

Night 1 MVP is Jeff Chimenti. Most noteworthy is his in the pocket playing all night. Great interaction in the jams. Killer night for the Dead and Company keys man.

Come back for more reviews of the 2nd and 3rd Dead and Company shows in the next few days. While your here, subscribe to the music school YouTube Channel by following the link.