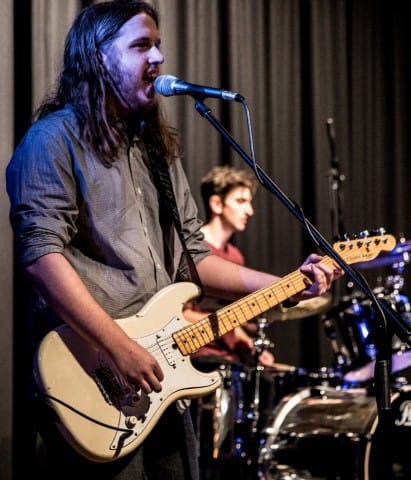 Eastern Suburbs School of Music continues to be proven as the place to come for VCE and exam preparation, getting our students into their first choice music courses. Two of our students will be studying at Box Hill Institute next year.

Congratulations to Eastern Suburbs School of Music student Geoff Fullgrabe on being accepted into Box Hill Institute to study the Bachelor of Applied Music. Geoff has been a long time student of the music school and completed VCE last year. He achieved an A in his VCE Music Group Performance exam. Fellow ESSM student Nick Hughes played drums for Geoff on the exam. Preparation and rehearsals took place at the music school.

To apply to this course Geoff attended an audition, performing two songs of different styles. He performed the jazz song West Coast Blues and the classic rock song Reelin’ in the Years. Following this he sat a music theory test and an interview to explain his future goals in music.

Also current student Bruno Jambrecina was accepted into second year of the Box Hill Institute Bachelor of Applied Music. Bruno had studied there last year in the Advanced Diploma course. Due to his achievements throughout the year he was elevated to the Bachelor course.