Somebody Get Me a Doctor – VCE Music Performance Solo Guitar

Guitarist Edward Van Halen is one of the few guitarists that can be classed as an innovator on rock guitar playing. He is famous for his two handed tapping lead guitar technique but equally influenced rock guitar tone and rock song writing throughout the 80s. This song comes from Van Halen’s second album released in 1979 named Van Halen II.

Somebody Get Me a Doctor is from the single note category. You have to play at least one song from this category to meet the requirements of the task (Compliance with the task criteria). Note that this song is originally played with the guitar tuned down a semitone. If you don’t have an extra guitar to use in this tuning think of raising the pitch of the backing track to standard pitch. This can be done with the audio software called Audacity.

Somebody Get Me a Doctor – Equipment

You will need a guitar that has a whammy bar so this means a stratocaster style guitar. A further bonus would be a guitar with a humbucker in the bridge position to handle the distortion tone required. A Strat style guitar will also suit the volume swells that are played during the song. The volume dial position allows easier access for this trick. 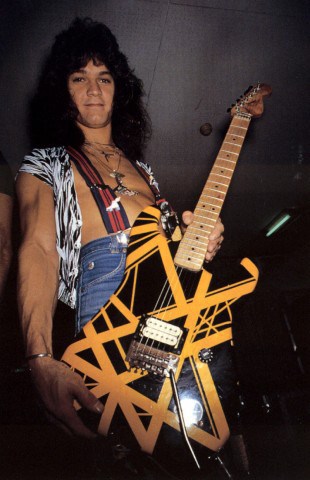 Eddie’s modded Strat with humbucker in the bridge

Somebody Get Me a Doctor – Structure

Breaking down the song we find there is six pieces of music to learn. The Intro and Outro require learning chord accents and are very short. The Verse and Chorus have distinct chord riffs that are played often. The bridge contains a new riff that includes the volume swell technique.

Somebody Get Me a Doctor – Technique

Intro – Listen closely to the count in on your backing track and get ready to blast power chord accents out.

Chorus – Amazing riff just made for air guitar poses! This riff is just as cool to play as it sounds. Take note of how many times you repeat the riff in each chorus as it varies.

Verse – Use of palm muting is required to control the open 6th string chugs. Be aware of the change of chords at the end of the verse leading into the bridge.

Bridge – Another amazing riff, this time including a trick where you turn off your volume, hit the chord and then swell the volume back up. Do this slowly to start with. Make sure the swell rolls smoothly and peaks at the end of the bar.

Outro – Like the intro, chord accents that need to be nailed.

Best of luck with all of your exams at the end of the year. I hope this will help you confidently approach your VCE Music Solo Performance exam and put on a great show.

For further assistance and information feel free to contact us via the contact form or call Rhys on 0421 705 150.